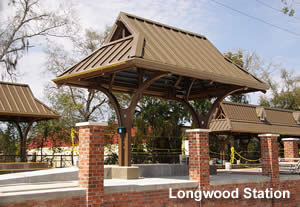 
Amtrak provides passenger service from the Orlando region to many cities in the U.S. If you want your car where you're going and you just don't want to drive it all the way there, bring it aboard the Auto Train with service between Sanford, FL and Lorton, VA. Amtrak has many partnership programs with other travel-oriented corporations that can make traveling easier.


The largest rail network in the eastern United States, CSXT is the core business unit of CSX Corporation. CSXT provides rail freight transportation over a network of more than 23,000 route miles in 23 states, the District of Columbia and two Canadian provinces. With its headquarters in Jacksonville, FL and key facilities in Tampa, Orlando and Pensacola, CSXT owns and maintains approximately 1,750 route miles in Florida. Their customers represent some of the state's largest industries, specializing in processed foods, phosphates and fertilizers, forest products and manufactured goods. The company employs more than 6,800 Florida residents.


The Florida Central Railroad was established in 1986 and expanded in 1990 as part of the Pinsly Railroad Company. It is located in the heart of central Florida. The FCEN operates 68 miles of track and directly serves industries in Orlando, Plymouth, Zellwood, Mount Dora, Tavares, Eustis, Umatilla, Ocoee, and Winter Garden. All interchanges are made with CSXT in Orlando, Florida. Due to its centralized location, the FCEN provides a competitive alternative to trucking and easy access to markets across Florida.


The first phase of SunRail, a commuter rail transit project that runs along a 78-mile stretch through Orange, Seminole, Osceola and Volusia counties, began service in May 2014 with 9,000+ daily ridership in its first week. The SunRail Station in Longwood, which is within easy walking distance of the Longwood Historic District, has the most cyclists disembarking from any station. The ease of reaching the trails from the our station is a major draw for visitors to Longwood.

The project is a result of collaboration among the Florida Department of Transportation; federal government; Orange, Seminole, Volusia and Osceola counties; and the City of Orlando.
Pay Online
Agendas
Employment
Request Tracker
Press Room
Video Tourbook
[]